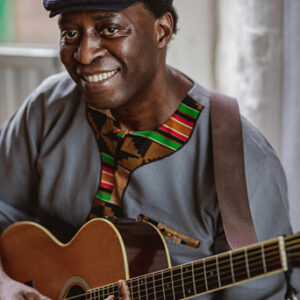 As both a solo musician and bandleader, Sam has recorded and performed with local and international artists at venues and festivals across the world.  In the UK, these include The African Centre in Covent Garden, Smollensky’s on the Strand,  Band on the Wall and The Bridgewater Hall in Manchester and appearances at Blue Dot and Kendal Calling.

Over recent years, Papa Sam has been sharing his native Palm Wine music through workshops for all ages at museums and galleries, including for International Mothers’ Language Day.