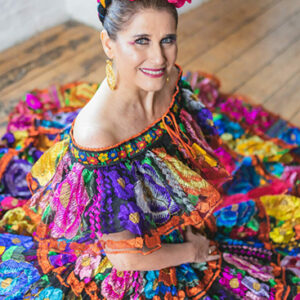 Magaly Flores, was born in Coyuca de Catalan, Guerrero in México. A member of the Institute for the Institute for the Preservation of Mexican Folk Dances (IDDMAC) in Mexico, CIOFF and the UNESCO CID Dance Council, in 2021 she received the Distinguished Mexican Award from the Mexican Government for promoting Mexican culture overseas.

After completing her Arts degree in dance and education, Magaly joined the Dance Research Centre (Centro de Investigacion de la Danza), which investigates and protects the culture of many regional folk dances across Mexico.

She moved to the UK in 1989, and after performing at cultural events on behalf of the Mexican Embassy, she founded Colibri Mexican Folkdance UK in 2016, a company dedicated to promoting and showcasing traditional Mexican dance throughout North-West England and beyond.  Performances have included Manchester Day, Mexican Independence Day and at Instituto Cervantes and Liverpool and Manchester Central Libraries, amongst many others.

Magaly’s main aim as an artistic director is that the new generations of Mexicans in the UK know and feel proud of their Mexican traditions and language.

Magaly also runs workshops for adults and children and she acted as a practical consultant to Rosamund Shreeves in her research updating her bestselling publication “Children Dancing”, which Amazon describes as being “widely acclaimed as a source book of ideas for schools, community groups and all those working creatively with children”.