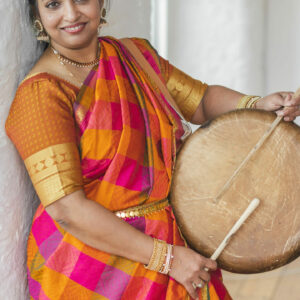 Mumbai-born Hamit Walia grew up in a family whose members were passionate about Indian classical music. His grandfather was a tabla player, so Hamit’s father sent his son for tabla lessons from age four, continuing to study the theory behind the instrument during his early teenage years.

Jayanthi Sivakumar has been teaching Indian Classical Dance – Bharatanatyam in Manchester for over 15 years.  A holistic teacher, she also introduces Indian folk dances to her students to ensure that the new generation of dancers are aware of their rich Indian cultural identity within the city’s multicultural community.

Born and brought up in Chennai, India, Jayanthi had an opportunity to learn Bharatanatyam as a child from the Late Guru Uma Sundaram – former graduate of Kalakshetra, Chennai, India. Alternating between dance and completing her Master’s in medical microbiology in 1992, she became a freelance artist, performing with many eminent professional dance artists & dance companies in India and abroad.   Having obtained a PGCE in 2003, Jayanthi began teaching science in secondary schools as well as teaching in her professional dance career.

A member of the ISTD (Imperial Society for Teachers of Dance) for Classical Indian Dance – Bharatanatyam, Jayanthi prepares students for ISTD grade exams each year. She was a Lead Artist for the Yuva-Gati CAT program under DanceXchange in Birmingham for 5 years until 2019, training talented young dancers from all over UK.  Jayanthi holds professional qualifications in “Safe Dance Practice and has a Diploma in Dance Pedagogy (DDP) from ISTD. She is also a member of People Dancing – the Foundation of Community Dance.