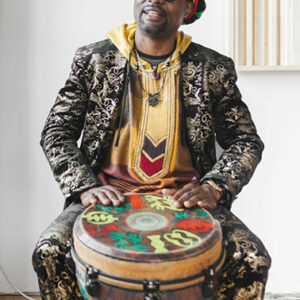 Liverpool-based Felix Ngindu is a professional musician from Kinshasa in the Democratic Republic of Congo. He is an experienced drummer and percussionist who can play a wide variety of styles, including African and other world rhythms, as well as rock and jazz.

He has toured the world as a performer, including as the regular drummer in the Kanda Bongo Man Band. He is a natural, charismatic and performer with a colourful fashion style and an unforgettable stage presence.

In addition to performing, Felix is a popular peripatetic music teacher, teaching both children and adults and delivering workshops in a wide range of settings including several schools in Merseyside.  He has a first class Honours degree in popular music and music production and his key areas of expertise include music performance, singing, songwriting, recording and sound technology.

Felix is currently working on a solo album to be released later this year.

Book Felix for workshops and performances.