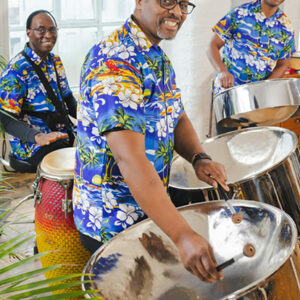 Jamsalana is a group of musicians from the Caribbean and Sierra Leone. Paul Aikens and Byron Calame hail from Jamaica, Morris Clarke is a British musician whose parents are from Nevis and Barbados. The three Caribbean musicians play steel pan and Sam Maitland, from Sierra Leone plays djembe and congas. The band plays traditional Jamaican and Trinidadian folk music and covers of pop songs.

The Caribbean band members emerged from the Manchester Youth Steel Pan Orchestra and Mancunian Steel, which was founded by Trinidadian, Arthur Culpepper, in the mid-1980s. In his late teens, Byron also spent a month in Trinidad, attending Carnival and learning about the musical traditions.

Performance highlights include the Manchester Day Parade, Manchester Rum Festival, with The Halle Orchestra at The Bridgewater Hall and even performing to members of the British Royal family!  They are also training up younger musicians who can perform with them if a larger band is required.

Book them to perform at weddings and parties, one-off events, festival and cultural occasions or for school or corporate workshops.