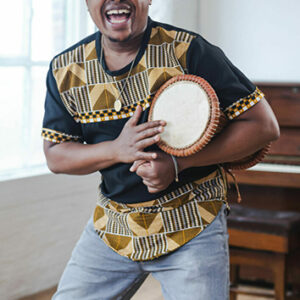 Now a superstar in his home country of Malawi, Tiwonge Hango’s Afro-pop and Jazz Fusion career began when a British family friend saw the six-year-old Tiwonge singing and dancing and gifted him a keyboard for Christmas.

Soon the enthusiastic young musician was performing African gospel music at school, family and community events until, aged 12, he won a national school music competition.  The British philanthropist Gill Hunter became his sponsor and aged 14, Tiwonge formed his first band called Tikhu Vibrations – Tikhu being a combination of the names of Tiwonge and his brother.  The group went on to enter a music competition run by educational non-profit Music Crossroads International in 2004.  They impressed audiences with their amusing dance routines and costume changes, traditional and modern instrument and African and Western rhythms and vocals and won the competition  This resulted in a two-month tour to represent Malawi in Sweden, Norway and the UK.

Two years later, Tiwonge was performing as a solo artist at Malawi’s international Lake of Stars festival and British talent spotters brought him to the UK and the Liverpool Institute of Performing Arts (LIPA).  On completion of his course, he returned to Malawi, gaining acclaim for his first two albums, Ndife Amodi and Chinyengo. Since then he performed in the USA and began teaching music to other young people in his home country.  In 2015 he was voted Upcoming Musician of the Year in Malawi.  He continued to be sponsored by Gill Hunter and came to the UK to study music at the University of Salford in 2019.

Book Tiwonge as a solo artist or as part of a trio.  He is currently putting together a new full band in the UK.