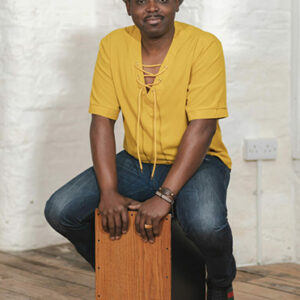 Tebu is a multi-instrumentalist musician from Douala in the Cameroon. His music blends African rhythms, jazz, Latin and Caribbean musical influences.

He is a highly creative composer and performer who creates much of his own music as well as creating new arrangements of traditional songs and jazz standards.

He began playing drums when only seven years old, and this meant that when he later started piano only five years later, he instantly recognised its potential as a percussive instrument.  At 17, Tebu started lessons with musician Zebson Pindy, who introduced him to classical jazz, which helped spark his interest in musical composition. Tebu spent several years as a soloist and performer in Cameroon from where he travelled to Scandinavia and Europe and was exposed to American Jazz.

Tebu ran a Jazz Academy in Douala before relocating to the UK.

Tebu’s recent projects include The Declaration, a performance and documentary project highlighting human rights issues in which he collaborated with Visual Artist Kooj Chuhan.  The work was commissioned by HOME Manchester as part of Horizons Festival 2019 and funded by Arts Council England.

In December 2021, he composed music for Wolè (Come In), a collaborative music performance presented by Voices Beyond, Amani Creatives and  Manchester International Roots Orchestra (MIRO), which examined issues of loneliness, survival, loss and racism during lockdown.