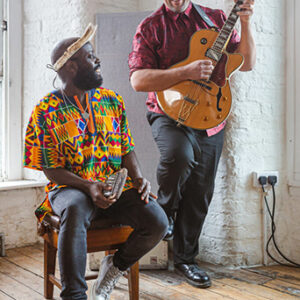 Mr Will and Bruce NCube

Individually already well-known on the UK and African world music scenes, Mr Will and Bruce Ncube, originally met at Drumcamp UK, where they were each performing and running workshops.

Mr Will’s trademark fingerstyle technique, in which he tries to replicate elements of an entire African band on solo guitar, is complimentary to Bruce Ncube’s own passion for sharing his traditional vocal Zimbabwean culture.

Outside of this joint project, both men are heavily involved in other arts and community music initiatives. Mr Will works extensively on music projects with young people as well as producing his own music and that of others, including the album Five Notes for the Seby Ntege Band, with whom he toured the UK in 2017 as a guitarist and musical director.

Bruce Ncube uses his skills as a multi-instrumentalist, dancer and vocal coach to share the culture of his native country with people of all ages and backgrounds.  He is well known for his traditional vocal harmony workshops with choirs.  He also works as a Theatre for Development practitioner for Mema Arts and is Director of the Africa Day in Njube Festival in Zimbabwe, where he is still very much involved in the traditional arts organisation Umkhathi Theatre Works.

With their joint passion for African traditions, the two musicians combine very different backgrounds and styles creating a musical experience at once both familiar and unique.

The video below shows the duo performing their arrangement of the song Ruva Rangu Ndiw Chete, written by Brian Rusike of the band The Pied Pipers – a very popular song in Zimbabwe during the 1990s. – https://youtu.be/pCi5evu1zzg