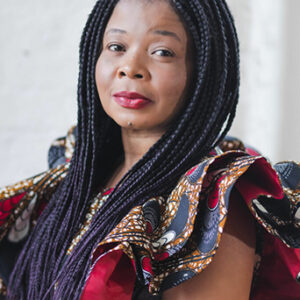 With a lifelong passion for World Music and Music of Black Origin, DJ Mayeva comes from a multicultural background with parents of Peruvian-Scottish and Norwegian-Irish origin.

Hailing from the Upper Zaire and Kivu in the Eastern DR Congo, singer-songwriter Emmanuela Yogolelo developed her passion for music from an early age, soaked as she was in the musical surroundings of her native land. She was exposed to the traditional acoustic music of the Shi and Mbuti pygmies, the musical genres of neighbouring Rwanda and Burundi, the music of the streets, the radio and the local nganda pubs.

Her mother sang whilst performing her household chores, the local fishermen sang on their boats, the farmers whilst carrying out their daily tasks. From the age of six, Emmanuela performed traditional songs as part of family weddings and funerals and her influences come from far and wide, including African gospel, Afro jazz and Congolese styles of music, such as Rumba, Seben and Agwaya.

As a solo singer, in a group with other musicians, or as part of the multi-award-winning Afro-Celt Sound system, Emmanuela has proved herself an engaging performer with a strong storytelling style.

She has appeared at high-profile venues and festivals throughout the UK, including Band on the Wall, The Royal Northern College of Music and Bridgewater Hall in Manchester and at London’s Barbican. Festivals include the Women of the World Festival on the South Bank, Shambala, Cropedy, Manchester International Festival and Manchester Jazz Festival.

Emmanuela is currently working on her latest album.