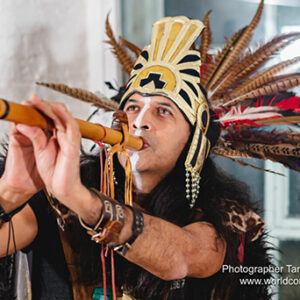 El Condor are Vladimir Cativo from El Salvador in Central America and Gary Garamendi from Peru in South America.

The duo performs folkloric music from the ancient civilisations of the Americas using a fusion of traditional instruments, such as drums, panpipes and flutes, with the addition of Western guitar. Vladimir and Gary wear traditional costumes and during their performances and workshops, they discuss the the importance of living in harmony with the environment and the positive vibrations of music which can soothe the stressful mind.

Before meeting Gary in the UK in 2004, Vladimir studied music back home in El Salvador and played in several bands.  While still a student he played in a band called Tupac Amaru, after the famous Inca warrior.

The band regularly played in the annual music festival held at the National Theatre in El Salvador.  Later he travelled to countries such as Canada, Japan, South Korea and Hong Kong with his band before finally settling in the UK.

El Condor have played all over the UK and appeared at festivals such as Blue Dot and Kendal Calling, although they feel their music is more suited to more intimate settings where they can interact with their audiences, such as museums and galleries.